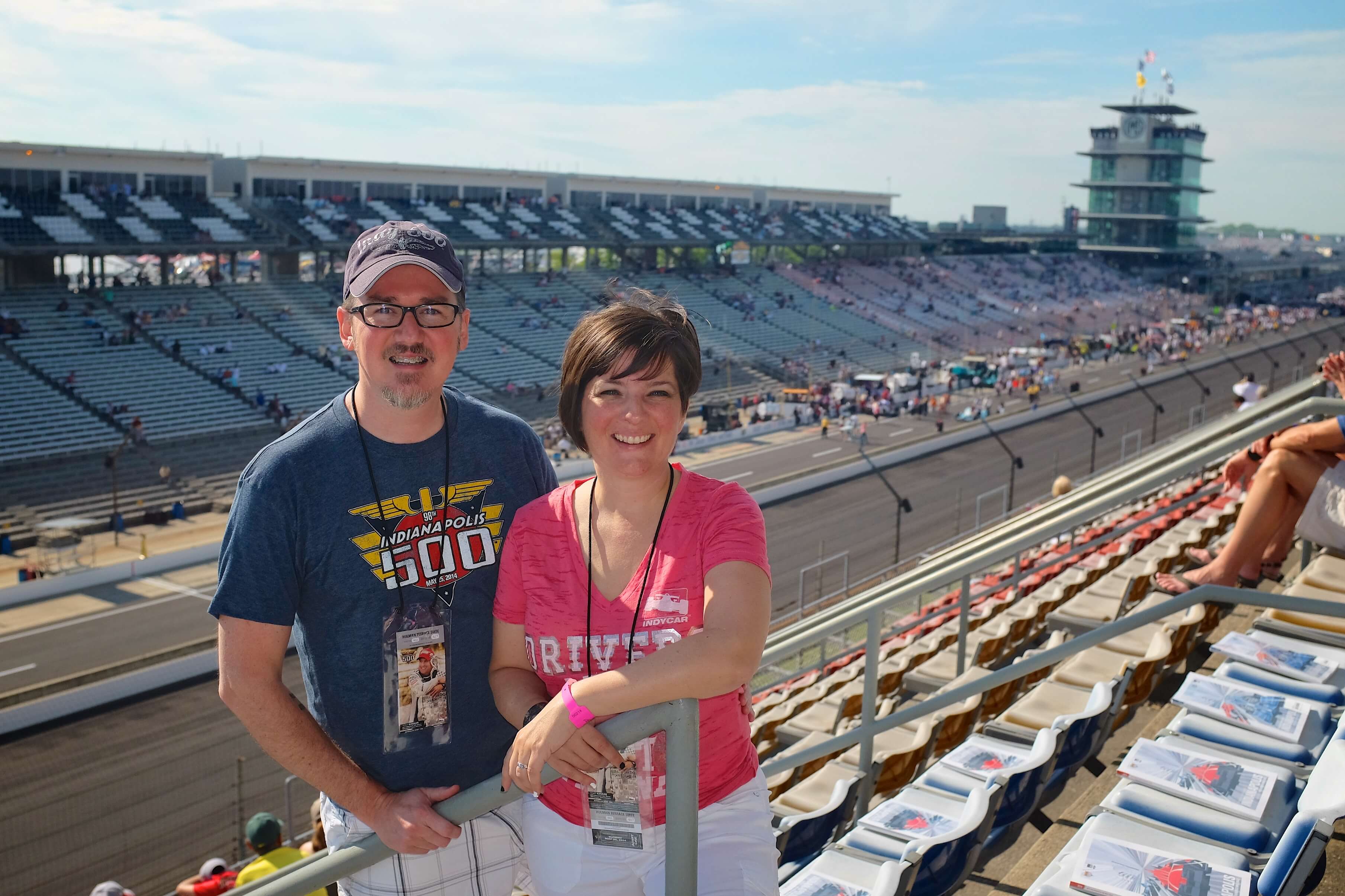 Kay and I had the privilege of attending the 98th running of the Indianapolis 500 along with a handful of our friends, thanks to the incredible generosity of our good friend, Chris Lema.

I’ve been an IndyCar fan for as long as I can remember.

Honestly, I can’t remember exactly how long I’ve been a fan of IndyCar racing. My Dad raced sports cars before I was even born, and he first introduced me to the Indy 500 when I was just a small kid.

When I was 13 years old, my Dad and I made a road trip together to Indianapolis during the off-season, and we took a tour of the Indianapolis Motor Speedway Hall of Fame Museum, which included a lap around the historic 2.5 mile oval track. I still remember getting out of the van to touch the legendary bricks that make up the start/finish line.

Since then, I’ve watched nearly every televised IndyCar race.

Thankfully, my wife, Kay, has also adopted my passion for IndyCar racing, and I think she’s become an even bigger fan than I am, since she follows the drivers and teams even more closely than I do. Often, she’ll catch me up on story lines that occur between races.

Although we watch just about every televised IndyCar race and have attended the Grand Prix of Houston every year, the Indy 500 has become an annual family tradition for our family, and we host a “watch party” each year for friends and family. It’s like the Super Bowl for our family.

Kay and I have talked many times over the years about attending the Indianapolis 500 in person, but it wasn’t until this year that it quickly become a very real possibility.

The Indianapolis 500 Mile Race is called “The Greatest Spectacle in Racing,” and is the world’s most famous and prestigious auto race. It’s the largest single-day sporting event in the world, and has been recently voted the “World’s Best Bucket List Sports Event,” topping other events like the Olympics, The Masters, and the Super Bowl.

“As a sporting event, there really is nothing like the Indianapolis 500 race day experience because of its 100+ years of history, pre-race pageantry and the sheer number of people who come each year to be part of this great spectacle,” said J. Douglas Boles, Indianapolis Motor Speedway president. “The race is definitely a must do on any sports fan’s bucket list. Once people experience the 500, it many times becomes more than a check mark on a bucket list, and turns into an annual pilgrimage to watch 33 race drivers compete for the chance to drink a bottle of milk in victory lane!”

During a conversation last year with my friend and business coach, Chris Lema, I mentioned that my wife and I are fans of IndyCar racing. I shared how we watch every race during the season, and attend local races whenever they come to town.

Chris asked if we had ever attended the Indy 500. I said no, but it was definitely one of those “bucket list” events we would like to attend one day.

“Do you want to go this year?” he asked, nonchalantly.

“I would love to, but it costs a small fortune,” I replied.

Now, my wife and I had been the recipient of Chris’ generosity before, so it didn’t come as a complete surprise when he asked, “What if I buy the tickets?” Still, we had no idea exactly what Chris had in mind.

Before we knew it, Chris had purchased 10 tickets along the front straight of the racetrack, and had begun inviting some of our mutual friends to attend with us. We booked our hotel and airfare, and began the long wait until Memorial Day weekend finally arrived.

Kicking off the weekend in grand fashion.

We flew into Indianapolis on Friday, May 23rd along with our good friends, Jared and Sam Atchison, and met Chris and Karim Marucchi for dinner and drinks at the Slippery Noodle Inn, Indiana’s oldest bar.

Our hotel was just a few blocks from the Soldiers’ and Sailors’ Monument in the middle of downtown, and we found a nearby cigar lounge which would become our nightly hangout after each days’ activities.

Everybody loves a parade!

Saturday, we attended the 500 Festival Parade almost entirely by accident. When we stepped out to grab a quick breakfast, we discovered that the streets had been blocked off and thousands of people were lining the streets for the traditional pre-race parade, which featured colorful floats, historic race cars, celebrities, and of course… the drivers.

“I’ve got something to tell you. We’re not sitting along the front straightaway.”

It wasn’t until later that day, when Karim and I accompanied Chris to the track to pick up our tickets that I became aware of Chris’ sneaky plan, which he had been working on for some time.

“I’ve got something to tell you,” he said, in a mock-somber tone. “We’re not sitting along the front straightaway like I originally told you.” He paused for dramatic effect.

“No. I called again a few weeks ago and found out that there were some tickets available in the Hulman Terrace Suites, which are actually at the very top of the grandstands along the front straight. They’re air-conditioned, and come with food service and an open bar. Do you think that’ll work?”

I was completely surprised. “Man, you really know how to make a bucket list trip EPIC, don’t you?”

Complete with dinner and a show…

That night, the six of us joined the rest of our friends, Andrew and Bri Norcross, and Josh and Caroline Eaton for an amazing dinner at Fogo de Chão, followed by a comedy show at the Hilbert Circle Theatre featuring comedian, Bill Engvall… again, courtesy of Chris.

Early Sunday morning, we made our way to the Indianapolis Motor Speedway… along with 250,000 other people. The traffic and gridlock were unlike anything I’ve ever seen.

Suddenly, our Uber driver noticed a line of cars approaching fast, led by a police escort. As soon as they passed by, he pulled into the back of the line of cars and we flew through town, being waved through red lights and even down oncoming traffic lanes with the help of officers at each intersection. Our driver dropped us off directly in front of the track, and we realized that the entire trip had taken us less than 20 minutes!

(If you ever need a great Uber driver in Indianapolis, let me know!)

We joined the throngs of people and walked down the paddock until we arrived at the elevator that took us up to the Hulman Terrace Suites.

The staff welcomed us warmly, and then I made my way to the balcony outside the suite. The view was stunning, and as I looked up and down the track, I felt the emotions of being in a place with so much rich history.

For more than a hundred years, drivers have come to this very track, pushing themselves — and their machines — to the very limit, fueled by the cheers of millions of race fans over the years… and now we were among those fans.

Even though we’ve watched the pre-race festivities for years on TV, every moment was so much more meaningful when witnessed in person. Jim Nabors sang, “Back Home Again in Indiana” for the 37th — and final — time since 1972. And I found myself getting choked up during the national anthem, while watching the flyover, and listening to the solo trumpet slowly play, “Taps.”

But nothing can prepare you for the excitement of hearing 32 Indy cars roar down the front straight at full speed for the first time!

We’ve attended dozens of road races throughout the years, but you simply don’t get the same sound or sensation on a road course as you do when the cars are at top speed, racing down a mile-long straightaway. It’s deafening. There’s a low-end rumble that you actually feel in your stomach, more than you hear.

And these cars are tuned to such precision, the drivers so evenly matched in their skill, that the cars are only separated by fractions of a second.

Early in the race, two of our favorite drivers, Graham Rahal and last year’s winner, Tony Kanaan, had mechanical difficulties that knocked them out of contention.

Another of our favorite drivers, Helio Castroneves, ran particularly strong all day, and near the end of the race was in position to win. It would be his fourth win, an achievement only shared by three other drivers in history.

Oh, and Helio is also Chris’ favorite driver, so we had no problem rooting for him to win!

The 2nd closest finish in the history of the Indy 500!

The final 20 laps of this race offered some of the closest racing I’ve ever seen in an Indy race anywhere. The top three cars, driven by Helio Castroneves, Ryan Hunter-Reay, and Marco Andretti traded the lead several times.

A dramatic crash by Townsend Bell with only 9 laps remaining threatened to end the race under the caution flag, but race officials decided to halt the race, bringing all the cars onto pit lane to wait while the damage to the wall was quickly repaired.

Soon, the race was resumed and the entire crowd was on their feet for the final six laps, while Helio and Ryan traded the lead again and again, lap to lap. Finally, Ryan passed Helio as they entered the final lap of the race, and took the checkered flag by a hair-raising .0600 of a second — the second-closest margin of victory in the history of the event.

It was impossible not to get caught up in the excitement and sheer emotion of the thrilling shootout, and while we would have loved to see Helio win his fourth Indy 500, we were just as thrilled to see Ryan Hunter-Reay win his first.

After the race, we stuck around long enough for the massive crowds to subside as we toured the garages and historic Gasoline Alley.

That evening, the group met up once more for dinner, this time at Claddagh Irish Pub. And after dinner, we meandered down to our favorite cigar lounge one final time for more deep conversations about life, business, and the future.

Honestly, beyond the unforgettable spectacle of the Indy 500 itself, the highlights for me are these times… the times spent in meaningful conversation, trading ideas, challenging and encouraging each other, and generally getting to know each other better.

While I hope to return to Indy again (perhaps for the 100th running?), the rewards of this trip will continue for years to come. And for that, I’m truly grateful to my friend, Chris Lema, who knows how to check off “bucket list” items in epic fashion!